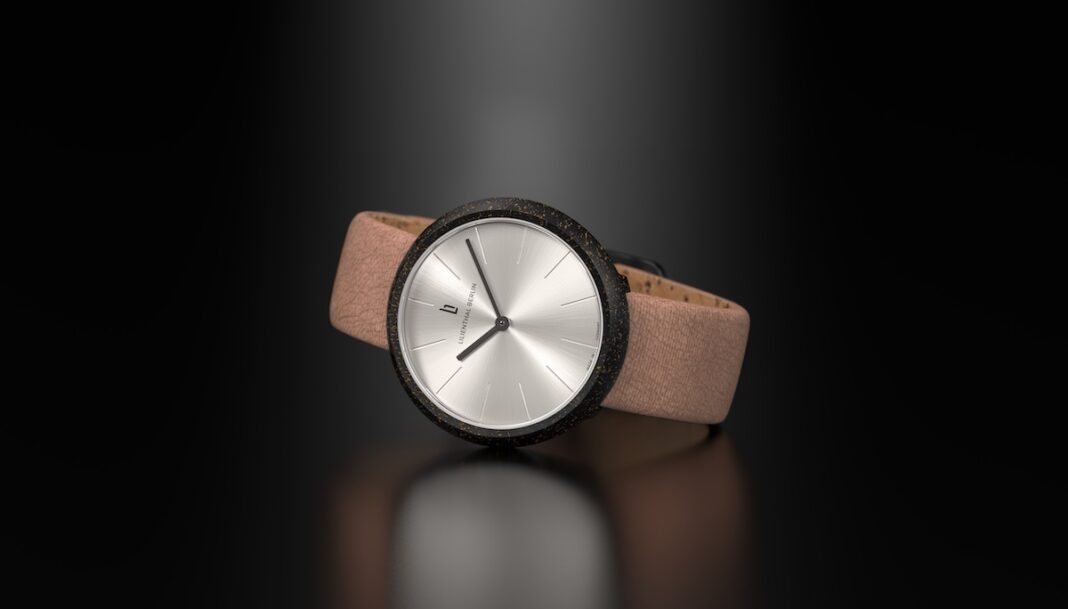 It’s time for a truly sustainable and innovative watch. In collaboration with the Berlin independent label Kaffeeform, Lilienthal Berlin designed the world’s first watch made from recycled coffee. Coffee grounds from Berlin cafés are processed with renewable and plant-based components and transformed into the exclusive Coffee Watch. An innovation in the watch industry. The watch will launch in four versions on Kickstarter in early September.

When it comes to sustainability in the watch industry, Lilienthal Berlin has been an early adopter of alternative materials, producing watches with solar cells and introducing watch straps made from renewable cork or cellulose-based vegan leather to its product range. Now, the Berlin watchmakers have discovered an even more unique material: coffee.

Sustainable. Attractive. High quality. Made from coffee. „Whenever we tell people about our plan, they‘re amazed and find it hard to believe,“ says Jacques Colman, one of the three founders of Lilienthal Berlin. „The idea sounds crazy, but we love watches and coffee, and who says you can‘t combine these two loves?“ Not settling for the status quo has been part of Lilienthal Berlin‘s DNA since it was successfully founded in 2016. Lilienthal Berlin focuses on independent Berlin design, sustainability, Made in Germany quality and a fair price. They work with their motto, SET YOUR STANDARD, in mind and where no goal is out of their reach.

In their search for new ways to become even more sustainable, they came across another young and creative startup from Berlin: Kaffeeform. Kaffeeform‘s founder, Julian Lechner, has developed an innovative material composed of recycled coffee grounds and other renewable, plant-based components. Using this material, the founders have now created the world‘s first watch made from recycled coffee: the Coffee Watch.

A declaration of love to a favorite beverage

The coffee grounds are collected from Berlin cafés and roasters with the help of a fleet of bicycles and through an innovative process from Kaffeeform, turned into a unique and robust material. The idea to create something new out of something supposedly useless started in 2015. The Kaffeeform Coffee-Material is characterized by a fine coffee scent and a special, marbled coffee look, which is different for each case and creates unique pieces. Since coffee and time simply go together, the time-out you allow yourself during the day for a little enjoyment is reflected in the entire design of the Coffee Watch. On one hand, the shape, color and feel of the rounded case is reminiscent of a coffee bean and of a cup on the other. It also features a sophisticated design element, the crown is fully embedded in the back of the watch, stylishly completing the harmoniously rounded look.

The dial of the Bauhaus-style Coffee Watch has been designed in two versions: a minimalist version with fine engravings for subtle depth, and a more classic version, with numerals in the same typeface used on Berlin’s street signs. The dials in both versions come in glossy black or warm silver with a sun cut finish. The straps add the final tangible element of enjoyment to the watch. Offered with the watch is a choice of vegan cellulose-based leather and plant-tanned leather in stylish coffee-inspired tones such as espresso or amaretti. For those who like their coffee black, there’s are also the options of a minimalist black strap, as well as two mesh straps that are dial-matching. The Coffee Watch has a case diameter of 42.5mm and is equipped with an R756 movement from the Swiss manufacturer Ronda.

This is Lilienthal Berlin‘s first campaign on Kickstarter. Since the Coffee Watch is so innovative, disruptive, unusual, and original, Kickstarter is the perfect platform for it. What better place to showcase such a unique product and a worldwide first? That‘s why the first watch made from the innovative Kaffeeform Coffee-Material will launch on Kickstarter in early September. The campaign will run for 30 days, and the team is excited about the response, and the questions and suggestions from the community. There will also be some interesting add-ons for the first supporters. If the funding goal is reached by the end of September, the watch will go directly into production. The delivery of the First Edition is planned for early 2022.

A project with potential for the future

„With the Kickstarter campaign, we want to let visionaries like us participate in this innovative yet disruptive project and pave the way for a new status symbol: sustainability. For the most part, in the watch industry, the concept of sustainability has only been applied to watch straps. Beyond that, hardly any potential has been explored because it does not correspond to the antiquated understanding of luxury. It‘s simply time to make a change in the watch industry as well,“ says Jacques Colman.

The Coffee Watch brings together everything Lilienthal Berlin believes in, great design, Made in Germany quality and a unique and sustainable material. After all, today‘s progressives are those who no longer need expensive clothes or luxury watches, but instead make decisions that are critical of consumption and thus pursue paths for a better future. Purpose instead of profit. Minimalism instead of opulence. „We‘re excited about the response and how the future of the watch industry will evolve as a result of projects like this,“ says Jacques Colman.