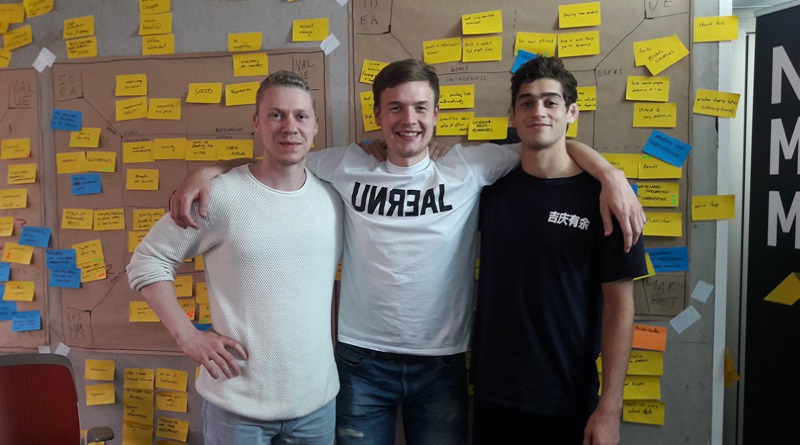 Please introduce yourself and your startup iBot to our readers!
Hi guys! My name is Patrekur and I’m the CEO and co-founder of iBot. I’m a 23 year old programmer from Iceland who loves to build things. iBot helps ecommerce companies build, host and manage ecommerce chatbots on Facebook Messenger. Chatbots are just beginning to become mainstream so a lot of people don’t know what chatbots are. This is normal, but it’s about to change!

A chatbot is a software that is designed to mimic conversations with humans. The chatbot uses NLP (Natural Language Processing) to attempt to understand what you are saying to it and then it replies accordingly.

Basically, a chatbot is an intelligent robot that follows a set of rules and in some cases utilizes artificial intelligence. The bot can chat with you and do things for you. A chatbot can help you order food, book appointments, buy stuff online and more. If you want to know more about iBot you can check it out here

How did you get the idea to iBot?
I think it started with me reading an article about chatbots around ten months ago – I was super excited and couldn’t get any sleep that night because I was certain that chatbots were going to be the next big thing. I sent a couple of my friends(currently also co-founders) the article and they were equally excited as I was. We had many ideas but we ended up with the idea of creating a chatbot builder tailored to the needs of ecommerce companies.

In the 2000s we had websites and they were all the rage. In 2008 Apple launched the app store and the world hasn’t looked up from their smartphones since. We believe that we are entering into the era of chatbots & conversational interfaces.

How difficult was the start and what challenges you had to overcome?
We are a team of designers and programmers who get a lot of ideas, so coming up with a viable idea was the easy part. I would say that the difficult part was getting funding. We spent the first 5-6 weeks of 2017 writing an application (40+ pages of very formal text) to the Icelandic Technology Development Fund. The fund gives out grants to promising startups in Iceland. There is a lot of competition for these grants and only about 10% of applications get accepted. We obsessed over the application and ended up receiving a grant for 20M ISK (around $200.000). Receive the money in six month intervals over a period of two years, getting this grant was vital to us being able to continue working on our product.

We are also participating in a business accelerator in Hamburg called the NMA. We are super excited to be in the accelerator .. Can focus on getting our MVP out the door and to build strategic connections to potential customers and investors.

What is the USP of your startup?
Since Facebook enabled developers to build chatbots on Messenger in April 2016, many startups have been focusing on building chatbot builders. Some of them are good and are already being used to build bots. Most of these startups offer a very general way of building chatbots but are quite complex to use (you can build any kind of chatbot with those systems). We are focused on ecommerce so that we can make it super easy to build and deploy an ecommerce chatbot on Messenger.

Our USP is really that we provide the easiest way to host and manage an ecommerce chatbot. We have features that are tailored to the needs of ecommerce companies. We really believe that having a small initial target market and to be focused on exceptional UX is what will allow us to offer the best solution for ecommerce companies.

Can you describe a typical workday of you?
We are still in product development mode, so a typical day for us is to wake up at 10:00, have breakfast and start coding. We generally work on our product for 6-12 hours a day, depending on mood. When we are not working on our product we are discussing product features, brainstorming a go-to market strategy and so on. Even though we code only 6-12 hours a day we are still working on it sub-consciously 24/7.

Where do you see yourself and your startup iBot in five years?
I see myself running the day-to-day affairs of the company and that we will have a lot of customers and employees.

What 3 tips would you give other Start-up founders on the way?
We are just at the beginning of our startup journey (we know some things, still a lot to learn!), my advice to someone who is just starting out would be:

Get good at devouring information on everything related to startups. As a founder you have to be a jack of all trades and know a bit about product development, marketing, sales, legal stuff, business stuff etc.
The books I would recommend the most:

Traction by Gabriel Weinberg
Zero to One by Peter Thiel
Hooked by Nir Eyal
This is mostly targeted at software startups but these books can still be useful to someone
not building something software related.

The best way to get good at something is studying those who have already done it successfully before, right? Study all the gurus, read between the lines and see how they think, study their mindset and how they view the world. I would recommend studying Elon Musk, Peter Thiel, Paul Graham and Sam Altman. There are a lot of resources out there, you can get all the information you need via the web.
I would recommend checking out Musk’s autobiography and youtube videos featuring him. Peter Thiel also has a lot of content out there, youtube videos and his book, Zero to One. Paul Graham (founder of Y-Combinator) has lots of youtube videos and essays.

Don’t underestimate the importance of getting traction.

It’s so easy to focus 100% on building the product and then launch to no audience. Building product and getting traction pre-launch should be of equal importance. Focusing on traction pre-launch might slow product development down, but it will save you time in the long run. We’ve been doing this ourselves with iBot, we are pre-launch but we’ve been guest posting on blogs and building our email list and so on.

Thank you Patrekur Magnusson for the Interview

Be patience and keep learning

Don’t be too shy to ask for help

Find the right balance between stubbornness and understanding

Before you launch a company, speak to your potential customers first

The company advocates for biodiversity as the key to food security

Learn to deal with rejection early