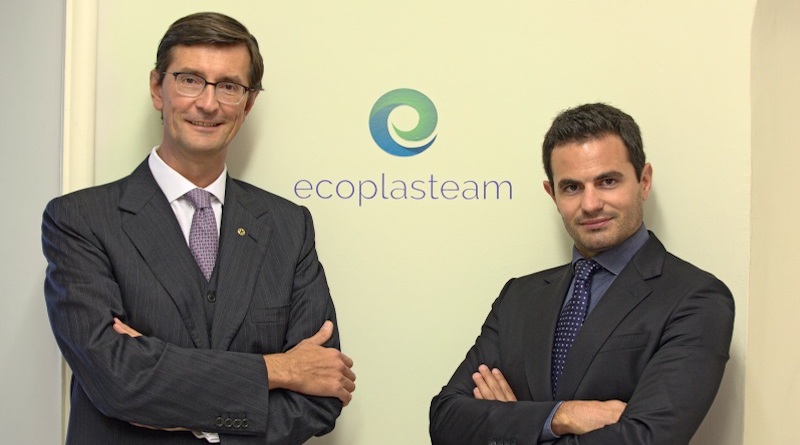 Please introduce yourself and your startup Ecoplasteam to our readers!
Ecoplasteam is a group of “young souls” who decided to invest time and money to solve an environmental problem and show that it is also possible to build a business with it.The group’s strength is enthusiasm and the whole project is based around a patent developed by an Italian entrepreneur.

The idea is to produce a “new plastic material” by recycling the poly-laminated of the packaging market. Ecoplasteam uses the waste/sub-product coming from paper mills that recover cellulose fibre from beverage and food cartons (tetrapak type).These multilayer products are insignificant in weight per package, but numbers become impressive when the total amount of waste is taken into account. This sub-product, only in Italy, “weights” more than 15.000 tons per year and in the world is about 2 millions tons .

We produce a plastic material, in various recipes, called EcoAllene, developed according to the demands of the market sectors and customers, with a completely mechanical (without solvents or chemicals!) production process.

How did you get the idea to Ecoplasteam?
The Ecoplasteam idea, as already mentioned, was born on the basis of a patent developed by an Italian entrepreneur. The incredible success of our first 400 tons, produced with a prototype system, which were used to produce various objects which were offered on the market, proved that EcoAllene had the potential of being successful.Furthermore, even when the “prototype material” had run out, the market was still talking about it. Market continued to talk about “the product to recover multi-layer materials”, meaning that EcoAllene is needed!

So, among a thousand difficulties, Ecoplasteam was born.

How difficult was the start and what challenges you had to overcome?
“Create a start-up” in Italy is a real challenge, because there is not a “venture capitalism” culture. But laws are very clear and useful to help people who want to start, you need only to study and apply. Drafting documents, looking for investment partners, dealing with bureaucracy…finding the right interpretation of laws and regulations. The only problem we didn’t have right from the start was to get the idea accepted; everyone liked the project immediately, congratulations and awards came in large numbers.

Even the companies that put these materials on the market applauded us… but everything stopped there, because there was not the “Team”.After six years of research, presentations, compliments and rejections, the final Team was formed, a lot, really a lot, of work and some more money and … Ecoplasteam was born.

Who is your target audience?
Our market of reference, but also partner of reference are all those companies, designers, technicians who want to use EcoAllene to produce using a material fully recyclable and that guarantees a constancy of mechanical characteristics combined with colorability. To this target, we additionally propose a process of circular economy: their products will be completely recycled at the end of their life cycle.

What is the USP of your startup?
EcoAllene is a product that can be defined as “unique” on the market, , thanks to the structure of its patent. Nevertheless, Ecoplasteam wants to promote its business and its image as a company looking to the future, constantly looking for new solutions to unresolved problems in the field of recycling. To achieve this, Ecoplasteam takes care of communication in an accurate way and, thanks to a specialized technical structure, is proactive with designers and customers to suggest and technically support applications in Ecoallene. Ecoplasteam has also an internal research department for new recipes to accompany the market demands.

Ecoplasteam is now on the market with two “main slogans” “Ecoallene is a response to the 2020 appointment” and “Ecoplasteam: Circular Economy 2.0 already today”.

Can you describe a typical workday of you?
Each member of the Ecoplasteam team operates within its sphere of competence. Therefore, while the technical part is responsible for production and plant care (our plant is 100 meters long and 20 meters large!), the commercial part is active on the market in search of new customers interested in making an environmental contribution to their business.
The management contributes with institutional and financial meetings that increase Ecoplasteam’s visibility on the market and allow it to pursue the company’s growth and expansion plan.

Where do you see yourself and your startup Ecoplasteam in five years?
In the next 5 years our plan foresees a further 5/8 plants in Europe and a technological development for recycling other multi-layer materials such as biscuit packaging films, French fries bags and multi-layer coffee capsules, a “real taboo” for Circular Economy today.

What 3 tips would you give other Start-up founders on the way?
Engage, convince and hire the best professionals on the market in the field of law, finance and managerial skills with “work for equity” or similar systems
put your heart enthusiastically, really believe in what you do
Never, never, never give up even when everything seems lost

Thank you for the Interview

Develop a good partnership with the industry as soon as possible

Transformation is not for wimps

Do as much as possible to achieve your vision

Writing Your First Business Plan for Your Startup: Mistakes You Should Avoid