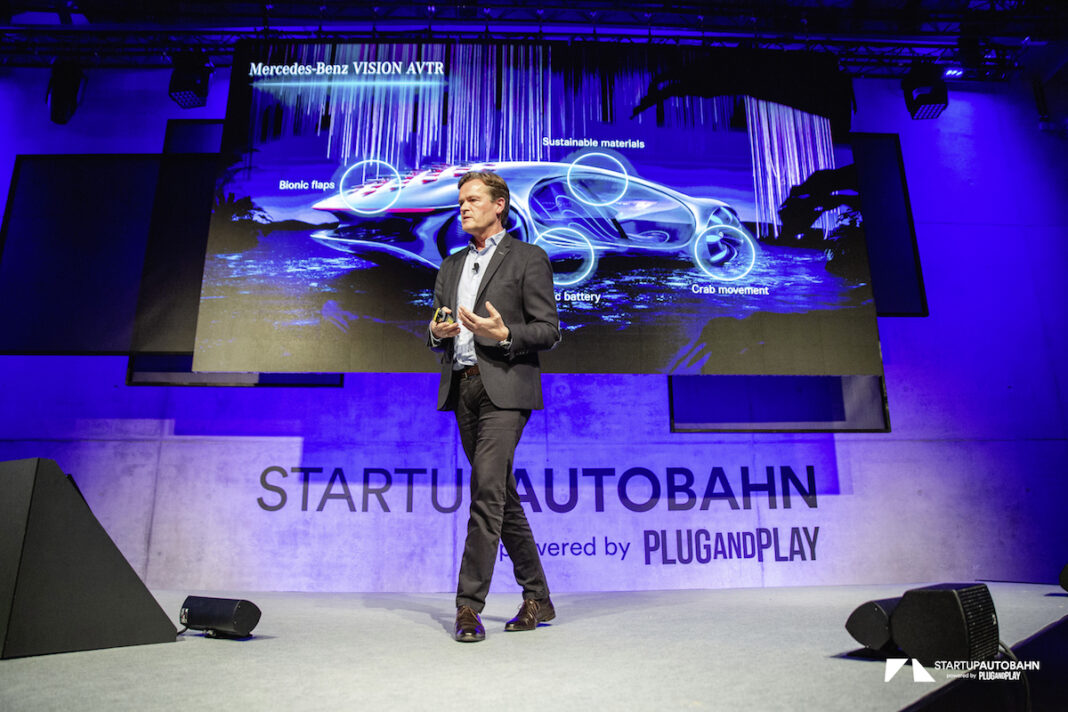 Innovation is the future. And the future is written by STARTUP AUTOBAHN, the innovation platform for mobility startups: Exactly five years ago, the most powerful European mobility platform in terms of the number of partners and implemented pilot projects was founded on the initiative of Mercedes-Benz. From 21. till 23. July 2021 there will be the EXPO DAY in Stuttgart in its tenth edition. At this event, organized by the STARTUP AUTOBAHN platform, young companies from all over the world present their technologies to the public. An anniversary with the participation of more than 30 partners from various branches of the automotive and automotive supplier industry – including several DAX companies. There are now six other locations worldwide in addition to Stuttgart, where Mercedes-Benz can scout startups. These include China, USA and South Africa. A completely new branch will be added in South Korea by this year, 2021.

“With STARTUP AUTOBAHN, we have successfully and sustainably connected the world of startups with the world of established large corporations,” says Markus Schäfer, Member of the Board of Management of Daimler AG, responsible for Group Research and Mercedes-Benz Cars Chief Operating Officer. “When we founded STARTUP AUTOBAHN in 2016, we had the intention to be exactly where we are today within five years: We have an impressive record of implemented innovations behind us and new projects, new partners and groundbreaking new ideas ahead of us. We feel better equipped than ever to extend our STARTUP AUTOBAHN innovation network even further around the globe.”

Mercedes-Benz has scouted more than 5000 startups via STARTUP AUTOBAHN

In five years of STARTUP AUTOBAHN, there have been almost 250 events and over 350 projects have been implemented by the industrial partners of the platform. Mercedes-Benz alone has scouted well over 5,000 startups, launched more than 150 pilot projects and implemented 17 larger projects.

These include innovations such as those from Lana Labs (Berlin), whose artificial intelligence supports the production of a vehicle and logistics. It is already used in the E-Class and S-Class production. Or “Get my Parking” (New Delhi), whose software actively supports searching for an available parking space. But also, the now world-famous navigation system what3words (London), which divides the world into almost 57 billion squares with a size of three by three meters and finds every corner of the earth with the input of three words.

“Our innovation platform STARTUP AUTOBAHN continues to grow, is sustainably successful and has held its own against every trend,” explains Jasmin Eichler, Director of Future Technologies at Mercedes-Benz AG. “We are proud that with the Open Innovation Strategy from Mercedes-Benz, we were able to integrate sustainable and future-oriented solutions from startups, scientists and other companies into the group.”

Another location will go live in 2021: Seoul (South Korea)

The success of STARTUP AUTOBAHN is noticed in the startup scene. This is also shown by the constantly increasing number of innovations and locations submitted. In addition to Stuttgart, six other sites have been included in the last five years. Sunnyvale (California, USA) and Tuscaloosa (Alabama, USA), East London (South Africa), Bangalore (India), Beijing (China) and Singapore. In 2021, Seoul (South Korea) will be the newest location with its own program and new partners.

STARTUP AUTOBAHN mediates worldwide between small innovators on one hand and large corporations on the other. Mercedes-Benz AG does not participate in the startups but engages them as a supplier or source of ideas, assuming the product fits or the idea is right. No venture capital flows. “We are venture clients,” says Dr Philipp Gneiting, Head of External Innovations at Mercedes-Benz AG. “We give startups the chance to immediately find the right contact person in large corporations and quickly gain a foothold.”

The fifth anniversary of STARTUP AUTOBAHN is celebrated with new innovations and technologies: at the anniversary of EXPO DAY 10 from 21.-23. July 2021 in Stuttgart. The EXPO DAY is always the finale of a selection process lasting several months, during which, from many hundreds of startups around the world, those with the best prospects of success present their technology. In the tenth round, there are 29 startups left. In a 100-day pilot phase with the departments of the respective companies, they had proven that their solutions were suitable for use in a large corporation.

One of the projects with Mercedes-Benz at EXPO DAY 10 is the startup Terranet (Sweden), which specializes in laser technology. With a laser, three cameras and a highly sensitive 3D scanner in the vehicle, Terranet wants to make assistance systems even more intelligent, especially in cities. The startup Endel from Berlin promises a unique sound experience in the vehicle. Among other things, it uses vital parameters via smartphone or Apple Watch to create personalized soundscapes. This can help you focus or relax. Also, there will be Beeplanet from Spain, a company that converts used batteries from electric vehicles into stationary energy storage devices. Or the startup Spread from Berlin, whose software visualizes 3D data to support engineers in the construction and maintenance of highly complex parts.

All information about registration, schedule and the participating startups at: EXPO 10 | STARTUP AUTOBAHN (pnptc.events)

The history of STARTUP AUTOBAHN goes back to an initiative by the Daimler AG. Together with the Startup Accelerator Plug and Play, the University of Stuttgart and the research factory ARENA2036, Daimler founded the innovation platform STARTUP AUTOBAHN in July 2016 and has since organized two three-month programs each year, each completed by an EXPO DAY. In the meantime, STARTUP AUTOBAHN in Stuttgart has grown to include 30 partners from various branches of industry such as the chemical, electronics, and logistics sectors. This STARTUP AUTOBAHN location has already become the largest European innovation platform for mobility startups in the first year of its existence. This has resulted in an entire innovation network around the globe in five years – with programs in the USA, South Africa, China, India, Singapore and, in the future, also in South Korea.